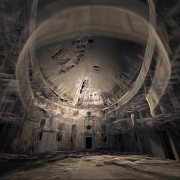 Film director and cinematographer Patryk Kizny – along with his talented team at LookyCreative – put together the 2010 short film “The Chapel” using motion controlled HDR time-lapse to achieve an interesting, hyper-real aesthetic. Enthusiastically received when released online, the three-minute piece pays tribute to a beautifully decaying church in a small Polish village built in the late 1700s. Though widely lauded, “The Chapel” felt incomplete to Kizny, so in fall of 2011, he began production on “Rebirth” to refine and add dimension to his initial story.

Exploring the same church, “Rebirth” comprises three separate scenes created using different visual techniques. Contemplative, philosophical narration and a custom orchestral soundtrack composed by Kizny’s collaborator, Mateusz Zdziebko, help guide the flow and overall aspirational tone of the film, which runs approximately 12 minutes. The first scene features a point cloud representation of the chapel with various pieces and cross-sections of the building appearing, changing and shifting to the music. Based on LIDAR scans taken of the chapel for this project, Kizny generated the point clouds with Thinkbox Software’s volumetric particle renderer, Krakatoa, in Autodesk 3ds Max.

“About a year after I shot ”The Chapel,” I returned to the location and happened to get involved in heritage preservation efforts,” Kizny explained. “At the time, laser scanning was used for things like archiving, set modeling and support for integrating VFX in post production, but I hadn’t seen any films visualizing point clouds themselves, so that’s what I decided to do.”

EKG Baukultur an Austrian/German company that specializes in digital heritage documentation and laser scanning, scanned the entire building in about a day from 25 different scanning positions. The collected data was then registered and processed – creating a dataset of about 500 million points. Roughly half of the collected data was used to create the visualizations.

Data processing was done in multiple stages using various software packages. Initially, the EKG Baukultur team registered the separate scans together in a common coordinates space using FARO Scene software. Using .PTS format, the data was then re-imported into Alice Labs Studio Clouds (acquired by Autodesk in 2011) for clean up. Kizny manually removed any tripods with cameras, people, checkerboards and balls that had been used to reference scans. Then, the data was processed in Geomagic Studio to reduce noise, fill holes and uniformly downsample selected areas of the dataset. Later, the data was exported back to the .PTS ASCII format with the help of MeshLab and processed using custom Python scripting so that it could be ingested using the Krakatoa importer. Lacking a visual effects background, Kizny initially tested a number of tools to find the best way to visualize point cloud data in a cinematic way with varying and largely disappointing results. Six months of extensive R&D led Kizny to Krakatoa, a tool that was astonishingly fast and a fraction of the price of similar software specifically designed for CAD/CAM applications.

“I had a very basic understanding of 3ds Max, and the Krakatoa environment was new to me. Once I began to figure out Krakatoa, it all clicked and the software proved amazing throughout each step of the process,” he said.

Even with mixing the depth of field and motion blur functions in Krakatoa, Kizny was able to keep his render time to roughly five to ten minutes per frame, even while rendering 200 million points in 2K, by using smaller apertures and camera passes from a higher distance.

“Krakatoa is an amazing manipulation toolkit for processing point cloud data, not only for what I’m doing here but also for recoloring, increasing density, projecting textures and relighting point clouds. I have tried virtually all major point cloud processing software, but Krakatoa saved my life on this project,” Kizny noted.

In addition to using Krakatoa to visualize all the CG components of “Rebirth” as well as render point clouds, Kizny also employed the software for advanced color manipulation. With two subsets of data – a master with good color representation and a target that lacked color information – Kizny used a Magma flow modifier and a comprehensive set of nodes to cast and spatially interpolate the color data from the master subset onto the target subset so that they blended seamlessly in the final dataset. Magma modifiers were also used for the color correction of the entire dataset prior to rendering, which allowed Kizny greater flexibility compared to trying to color correct the rendering itself. Using Krakatoa with Magma modifiers also provided Kizny with a comprehensive set of built-in nodes and scripting access.

The second scene of “Rebirth” is a time-lapse reminiscent of “The Chapel,” while the final scene shows live action footage of a dancer. Footage for each scene was captured using Canon DSLR cameras, a RED ONE camera and DitoGear motion control equipment. Between the second and third scene, a short transition visualizes the church collapsing, which was created using 3ds Max Particle Flow with help of Thinkbox Ember, a field manipulation toolkit, and Thinkbox Stoke, a particle reflow tool.

“In the transition, I’m trying to collapse a 200 million-point data cloud into smoke, then create the silhouette of a dancer as a light point from the ashes,” shared Kizny. “Even though it’s a short scene, I’m making use of a lot of technology. It’s not only rendering this point cloud data set again; it’s also collapsing it. I’m using the software in an atypical way, and Thinkbox has been incredibly helpful in troubleshooting the workflow so I could establish a solid pipeline.”

Collapsing the church proved to be a challenge for Kizny. Traditionally, when creating digital explosions, VFX artists are blowing up a solid, rigid object. Not only did Kizny need to collapse a point cloud – a daunting task in of itself – but he also had to do so in the hyper-realistic aesthetic he’d established, and in a way that would be both ethereal and physically believable. Using 3ds Max Particle Flow as a simulation environment, Kizny was able to generate a comprehensive vector field of high resolution that was more efficient and precisely controlled with Ember. Ember was also used to animate two angels appearing from the dust and smoke along with the dancer silhouette. The initial dataset of each of angels was pushed through a specific vector noise field that produced a smoke-like dissolve and then reversed thanks to retiming features in Krakatoa, Ember and Stoke, which was also used to add density.

“To create the smoke on the floor, I decided to go all the way with Thinkbox tools,” Kizny said. “All the smoke you see was created using Ember vector fields and simulated with Stoke. It was good and damn fast.”

Another obstacle was figuring out how to animate the dancer in the point clouds. Six cameras recorded a live performer with markerless motion capture tracking done using iPi Motion Capture Studio package. The data obtained from the dancer was then ported onto a virtual, rigged model in 3ds Max and used to emit particles for a Particle Flow simulation. Ember vector fields were used for all the smoke-like circulations and then everything was integrated and rendered using Thinkbox’s Deadline, a render management system, and Krakatoa – almost 900 frames and 3 TB of data caches only for particles. Deadline was also used to distribute high volume renders and allocate resources across Kizny’s render farm.

Though an innovative display of digitally artistry, “Rebirth” is also a preservation tool. Interest generated from “The Chapel” and continued with “Rebirth” has enticed a Polish foundation to begin restoration efforts on the run-down building. Additionally, the LIDAR scans of the chapel will be donated to CyArk, a non-profit dedicated to the digital preservation of cultural heritage sites, and made widely available online.

The film is currently securing funding to complete postproduction. Support the campaign and learn more about the project at the IndieGoGo campaign homepage at http://bit.ly/support-rebirth. For updates on the film’s progress, visit http://rebirth-film.com/. 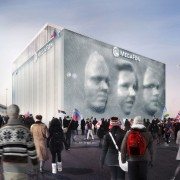 Visitors to this year’s Sochi Winter Olympics will have the opportunity to see their face rendered on the side of a building in giant 3D mechanical polygons. The work of British architect Asif Khan, Megaface is like a cross between Mount Rushmore’s sculpted facade and the pinscreens that adorned executive offices of the ’90s.

The design of a 2000 sq.m pavilion and landscape for MegaFon, one of the largest Russian telecoms companies and general partner of the Sochi Winter Olympics.

3D photo booths within the pavilion and across Russia in MegaFon retail stores will scan visitors’ portraits to be recreated in by the pavilion. It’s facade is designed to function like a huge pin screen. It is made up of over 10,000 actuators which transform the building’s skin into a three-dimensional portrait of each visitor’s face.

The concept is to give everyone the opportunity to be the face of the Olympics.

The structure is sited at the entrance to the Olympic Park, and incorporates an exhibition hall, hospitality areas, a rooftop viewing deck and 2 broadcasting suites.

The installation consists of 10,000 actuators fitted with LEDs and arranged into triangles that can extend up to six feet out from the side of the building to form 3D shapes. Visitors will be invited to have their face scanned at on-site “3D photo booths” before Khan’s actuators will move to form giant 500-square-foot representations of the scans. Three faces will be shown at any given time for 20 seconds, and it’s estimated 170,000 faces will be rendered during the games. Visitors will also be given a link where they can watch a 20-second video showing the exact moment when their face was on the side of the building.

170,000 FACES WILL BE RENDERED DURING THE GAMES

Megaface will comprise one side of Russian carrier Megafon’s pavilion — the installation’s name itself part of the massive branding exercise that is the Olympics. It’s some way from completion, but Khan and Swiss firm iart, which is realizing Khan’s vision, have successfully demonstrated a prototype (shown below) that uses just 1,000 actuators to render a small-scale image.

The Kinetic Facade of the MegaFaces Pavilion: Initial Batch Test from iart on Vimeo.

Learn more about how 3DS is manufacturing the future today at www.3dsystems.com.

Leadership Through Innovation and Technology

Today its comprehensive range of 3D printers is the industry’s benchmark for production-grade manufacturing in aerospace, automotive, patient specific medical device and a variety of consumer, electronic and fashion accessories.

More information on the company is available at www.3DSystems.com.

Gentle Giant Studios is the leading provider of 3D digital data and is the first company to utilize digital data and 3D printing technology for the consumer products and entertainment industries. Creating beloved 3D characters from a variety of franchise properties with worldwide name recognition, including Star Wars, Marvel, Avatar, Harry Potter, AMC’s The Walking Dead, and The Hobbit. Gentle Giant produces a wide range of products that are manufactured using the highest quality utilizing the most advanced 3D scan to print techniques and a team of incredibly talented artisans that digitally captures the likenesses of actors, props, and scenery to accurately model and recreate these images for fans and collectors everywhere. Gentle Giant Studios also provides prototyping and product development services for consumer products, fine art, theme parks, and provides on set digitizing services for major motion pictures.