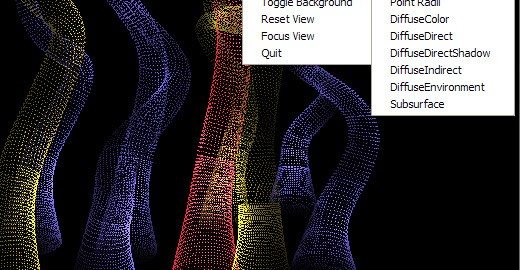 Creating animations of large point cloud datasets generated from terrestrial laser scanners and LiDAR has been an issue for a number of years. While it has been possible using tools such as Leica Geosystems Cyclone or Pointools, just to name a couple, it is still a very cumbersome task. It is exciting to see the CGI industry beginning to adopt the use of this data and developing applications that make it easier to visualize.

Over the last few years, a brand new technology has emerged for creating CGI effects that has already made a big impact on feature film production. It is called point-based rendering, and this powerful technique makes creating global illumination effects for feature film far more practical and efficient than before. In fact, this year the Academy of Motion Picture Art and Sciences awarded the creators of this innovation, Per Christensen, Michael Bunnell and Christophe Hery, with a Scientific and Engineering Academy award.

In this great article written by Nils O Sandys at CGSociety, we will look into the development of this important new technology, how point-based rendering works, and what this all means to the future of feature film production as we know it. Read the full article here.